A SCOTS Catholic shrine has been torched in a fire attack.

The Lourdes Cave at the Carfin Grotto on Newarthill Road in Motherwell was left badly damaged after it was vandalised.

Police confirmed they received a report around 12.50pm  that the holy spot had been targeted.

Afterwards spokespeople for the owners called on the Scottish Government to act to protect places of worship.

The shrine dedicated to Our Lady of Lourdes, was created in the early twentieth century.

Sadly all too common an event in Scotland. What will @NicolaSturgeon and the @scotgov do to reassure Catholics and the protection of their places or worship? pic.twitter.com/D3mMuvvc2l

It was the brainchild of Father, later Canon Thomas Taylor, who  died in 1963.

He was the parish priest of St. Francis Xavier’s Parish in the small, mining village of Carfin, which lies two miles east of Motherwell.

Following a trip to France’s principal Marian shrine at Lourdes, Canon Taylor’s vision was to build a religious memorial in honour of ‘Our Blessed Lady’ based on the template of the Grotto of Massabielle.

Since its opening in the early 1920s, the “grotto” has attracted pilgrims in the hundreds of thousands and its environs have been modified and enhanced with rich Catholic symbols and buildings.

“We are very sad to report some yobs have destroyed some of the candle stands were we pray for our loved ones. Whilst there is financial damage and implications for repairs at a time when we are tight in cash, there is larger impact of intimidation and desecrating the prayers of the faithful and their loved ones,” they said.

In a video on social media, Sancta Familia Media – who run press inquiries for the shrine – said the blaze had caused massive damage to cabling and candle holders while the roof appeared to also have been burned.

Memorial plaques for loved ones have also been damaged.

They also called on the Scottish Government to reassure the Catholic community in Scotland about protecting their religious spots.

In a social media the group wrote: “Sadly all too common an event in Scotland. What will @NicolaSturgeon and the @scotgov do to reassure Catholics and the protection of their places or worship?”

A spokesman for Sancta Familia Media said: “We know it was deliberate because items were added in a pile and set on fire within the Lourdes memorial cave.

“It is worrying for Catholics that so many acts of vandalism and destruction are reported up and down the country. We hope it is addressed at a national level.

“The Grotto is open to everyone not just Catholics and we would hate to be in a situation where we had to close access which is enjoyed by many as a place of peace.”

A Police Scotland spokesperson said: “We were made aware of damage caused at Carfin Grotto on Newarthill Road in Motherwell around 12.50pm on Monday, 18 October.

“Enquiries are ongoing and at an early stage.” COVID-19: Emergence of Omicron variant could be down to ‘reservoirs’ of virus in the unvaccinated and immunosuppressed 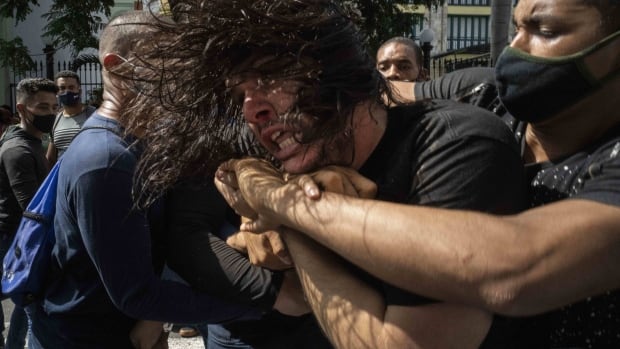